The Smoke and Iron Firefighters Motorcycle Club was founded in Texas by Mike “Big Mike” Hayes and Terry “T-Wall” Johnson in 2006.  When Mike and Terry decided to join a motorcycle club, they researched the available motorcycle affiliations in the United States.  After reading the requirements to join the various clubs out there, they realized there was no firefighter club available that allowed both career and volunteer firefighters.  Most clubs were exclusive to a state, department, or union affiliation.  After some deliberation, they decided to create their own club.  This club would serve firefighters no matter if they were volunteer, career, active, or retired.  The true meaning of Brotherhood.  Shortly after the creation of Chapter 1, another chapter was created.  Each chapter was founded for much the same reason as the first chapter.  The original 8 members in California known as the “CA Original” stood to define and build upon the mission set forth by the Texas Chapter.  Eventually the club name grew in firefighting circles and other chapters were formed.  All working to define what we know refer to as Smoke and Iron Firefighters Motorcycle Club.

As with any new organization, there were many growing pains.  Members came and went, chapters came and went, and our very own colors changed several times.  In California, there are specific guidelines when introducing new club colors into the world of Bikers.  California requires that you get permission from the Confederation of Clubs prior to wearing the traditional “three piece cut”.  The members of California honored these rules by changing the colors to a single patch until permission was granted to switch back to the three-piece national standard.

After years of participating in rides, events, and meetings, permission was given to wear our three-piece national colors.  These colors were earned and not given so the respect of our colors runs very deep in California as it does throughout the Nation now.  The original colors were red, black, and white.  Today, they are just black and white.  Black and white stands for the nature of our line of work. It’s cut and dry, life and death, “black and white.”   The RFB stands for “Remember Fallen Brothers.”  Every time we put on our Cut, those that have fallen are carried on our backs in remembrance with the skull.  Fortius Quam Fraternitas Nullum Est Vinculum, or FQFNEV is displayed on the front to show what we are all about with the Club, which stands for "There's no stronger bond than brotherhood!"

History is being written everyday and with this Club, there is no exception.  The future looks very promising for this Club, and we get bigger every year as more and more Firefighter Brothers hear our call.  One day you too may serve to write a piece of Smoke and Iron history 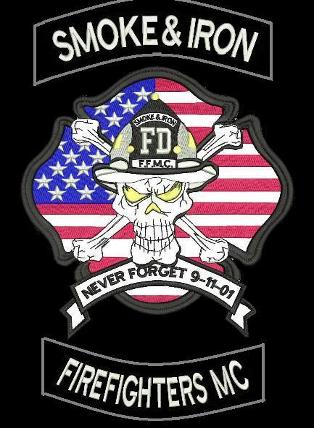 This is the OLD Cut that is no longer in use. If ANYONE sees these flying out and about, please contact us immediately. We are aware that there are a couple web pages with this showing, they are old sites and we are in the process of having them removed.